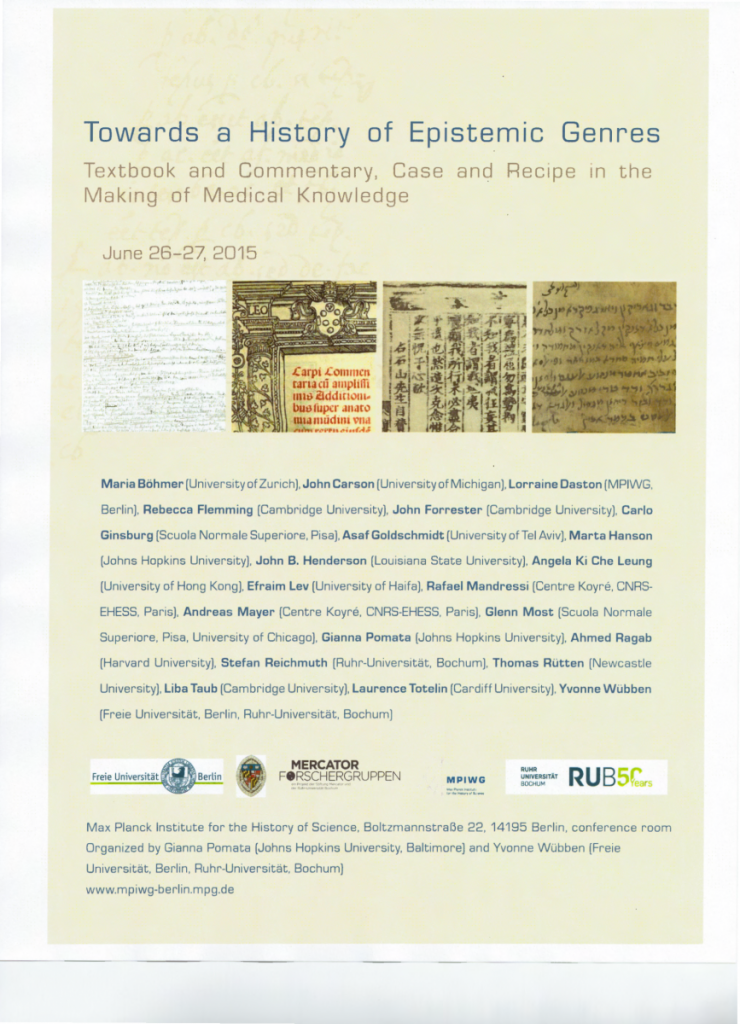 28 SepTowards a History of Epistemic Genres

Prof Gianna Pomata has co-organized a confernence titled “Towards a History of Epistemic Genres: Textbook and Commentary, Case and Recipe in the Making of Medical Knowledge”, which will take place 26-27 June at the Max Planck Institute of the History of Science.

This conference will explore the role of genres in the production and transmission of scientific knowledge, focusing on four basic textual forms: the textbook, the commentary, the case and the recipe. All these genres (with the exception of the recipe) have featured significantly in many disciplinary fields, from the law to natural philosophy, from moral philosophy to medicine. But it is especially in medicine that the four of them (the recipe included) have played a fundamental role, often in synergy with each other. So our conference will look specifically at these genres in the making and transmission of medical knowledge.

At the same time, we hope that the conference will contribute to a wider effort of thematizing the role of genres in scientific practices more in general. To this purpose, we propose a distinction between literary and epistemic genres. A cognitive dimension may be part of most forms of writing, but that does not mean that all texts have primarily a cognitive purpose: texts can be related to a wide range of human activities, of which knowledge-making is just one aspect. When we speak of epistemic genres, we mean specifically those kinds of texts that develop in tandem with practices of knowledge-making (however culturally defined). We invite historians of medicine, science and technology as well as literary scholars to consider the distinction between literary and epistemic genres as a useful heuristic tool.