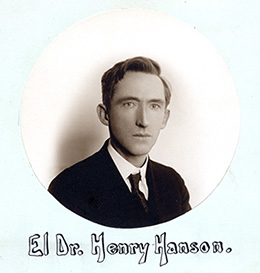 From 1919-1921, Henry Hanson, MD (1877-1954), as Director of Yellow Fever Control for the National Health Department of Peru, led a Rockefeller Foundation-funded fight against a yellow fever and bubonic plague epidemic in northern Peru. In 1921, his staff in the Campaña Sanitaria Contra la Fiebre Amarilla en el Peru presented Hanson with this large commemorative volume containing materials documenting the activity in the department of Lambayeque in 1921. Included in the book are: typed copies of letters and reports; photographs and descriptions of the sanitation corps; graphs and maps of disease vectors and water supply by town; morbidity, mortality, and social condition charts by town. One of the most successful techniques recorded was the introduction by campaign workers of small larvae-eating fish in water containers throughout the district, which resulted in a dramatic decrease in the mosquito population, contributing to the end of the epidemic.