Baltimore Harbor, 1968 – Courtesy of the Baltimore Museum of Industry

With a population of over 600,000 people, Baltimore is the largest city in Maryland

The city is located on the Chesapeake Bay, and its Inner Harbor – which famously underwent a complete redevelopment in the 1970s – is abuzz with diners, shoppers and families out for a stroll by the water. Book-ended by the National Aquarium and  Maryland Science Center, the Inner Harbor is a tourist magnet.

But there’s a lot more to Baltimore than a weekend break. So what is Charm City really like for those of us who call it home? 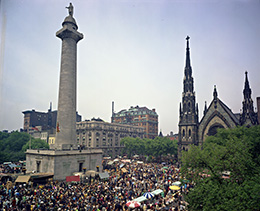 Baltimore is a city of contrasts. The skyscrapers that dominate the commercial district are only a short walk from residential neighborhoods with small town charm. Many of these neighborhoods have been shaped by the various waves of immigration to the city, both from abroad and the southern US. Historically, Baltimore was the second most important port of entry into the United States after New York. So the ethnic diversity of Baltimore gives the city a ‘melting pot’ atmosphere that is celebrated throughout the year with Italian, Greek, and Polish festivals that showcase international aspects of culture, art and food.

Speaking of food, Baltimore has the oldest continuously-operating  public market system in the United States. Just one block from the Institute of the History of Medicine is one of seven city markets that have dozens of stalls offering everything from local Chesapeake Bay crabs and southern soul food, through tacos to Korean specialties. You can round these out with one of Baltimore’s famous snowballs and wash it all down with a ‘half-half’, the city’s term for a concoction of lemonade and iced tea. 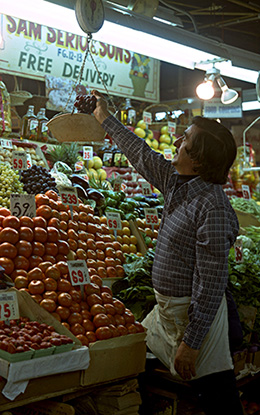 Weighing produce at Lexington Market, 1975 – Courtesy of the Baltimore Museum of Industry

As well as the city markets, Baltimore also has a fantastic array of  Farmers’ Markets where you can get locally grown fruits, vegetables, eggs, dairy, and meat year-round. On Saturdays, it’s the Waverly Farmers’ Market, at 33rd and University Parkway, about five blocks east of the Homewood campus, from seven till noon, year-round, come blistering heat or blinding snowstorm. From early May till Thanksgiving, vendors are only allowed to sell local produce; in the cold months you can still get local dairy, meat, and winter produce, but even the food they ship in seems to be better quality than what you find in the grocery stores.

Sundays, between April and Christmas, the Downtown Baltimore Farmers’ Market and Bazaar operates under the freeway overpass at Guilford near Central Ave. In peak season, you can find thirty varieties of heirloom tomatoes, ten kinds of eggplant, buffalo steaks, or chanterelles—as well as prepared delicacies, such as Ethiopian food, fresh-made crepes, and Blacksauce Biscuits.

Baltimore is sports-crazy.  The Baltimore Orioles and  Baltimore Ravens play major league baseball and football, respectively, in new stadiums near the Inner Harbor. The Orioles frequently have cheap tickets for Hopkins students, so there’s no excuse not to go one of the best sports stadiums in the country.

There are also plenty of rec sports leagues in Baltimore city, ranging from softball to soccer to kayaking. For our students, these leagues not only provide a break from the academic program, but also a great outlet for meeting new people and getting involved in Baltimore life. One of our former students even graced the Charm City Roller Girls during her graduate career.

Baltimore is an increasingly bike-friendly city. A local lobby (including Baltimore Bike Party, a monthly mass ride around town, and  Bikemore, a city cycling website) has gotten many new bike lanes installed that make it easier and safer to get around by pedal power. Several faculty and students are regular city cyclists. Join us!

The NCR Trail is an old railroad bed converted to a bike and running path that begins a few miles north of the city that will take you all the way to Pennsylvania.

If you take the NCR trail up to Monkton, you’ll find the laziest sport in the world— tubing. The creeks and rivers around Baltimore are gently scooped out of the surrounding clay bed into a natural La-Z-River ride. There are  a number of popular sites for the sport.

For those who prefer inside attractions, the history of the city comes alive at the Baltimore Museum of Industry, with permanent exhibits including a 1910 pharmacy, a garment workshop, and a print shop that has a fully-operational linotype machine from the Baltimore Sun.

Meanwhile, the American Visionary Art Museum houses about 4,000 pieces of ‘outsider’ art and a compelling array of rotating exhibits. Alternately, the Baltimore Museum of Art near the Homewood campus and the Walters Art Museum in the Mount Vernon district both have world-class collections.

Popular events on the local calendar are Artscape, which attracts over 350,000 people and is America’s largest (and sweatiest! in mid-July) free arts event, while the four-day  ScapeScape in the StationNorth arts district, where more than a hundred acts perform on seven stages.

Locals are also spoilt for classical music. A highlight is the Peabody Institute, the conservatory attached to Hopkins. Peabody’s various ensembles put on numerous performances throughout each semester in a wide array of genres, from choral and orchestral, through jazz and percussion to opera. Concerts are discounted for students, and the frequent recitals of conservatory students are completely free! One of our students has sung in the Peabody Renaissance Ensemble.

The Baltimore Symphony Orchestra is a national-caliber ensemble, whose concerts often have $10 student tickets available. A series of ‘Hopkins at the Symphony’ evenings brings together students and faculty for special educational programs with music director Marin Alsop. Meanwhile Lyric Opera Baltimore puts on four major operatic productions each season and An Die Musik in Mount Vernon has performances of chamber music, jazz, and early music several nights a week.

Downtown Baltimore, 1929 – Courtesy of the Baltimore Museum of Industry