Hair of the Cow

In 1798, Edward Jenner, an English country physician, published his historic work, An Inquiry into the Causes and Effects of the Variolae vaccinae, in which he demonstrated the effectiveness of vaccination in the prevention of smallpox, through illustrated case histories. In 1932, Dr. Henry Barton Jacobs donated his library to the Institute of the History of Medicine.  One part of his collection is an enormous body of resources documenting the history of smallpox, including a large concentration of material relating to Edward Jenner and vaccination: one of the two known oil portraits of Jenner done from life; many French and English caricatures on the topic of vaccination; over one hundred letters written by Edward Jenner and other manuscripts (many published in Letters of Edward Jenner, and Other Documents Concerning the Early History of Vaccination. Edited by Genevieve Miller. Johns Hopkins University Press, 1983); numerous editions and translations of Jenner’s publications; hundreds of books and pamphlets recording the promotion of and campaigns against vaccination for over a century throughout Europe and America. Edward Jenner was a very special hero to Dr. Jacobs, who had one the four stained-glass windows, specially designed for his collection at the Institute, labeled “Vaccination.” 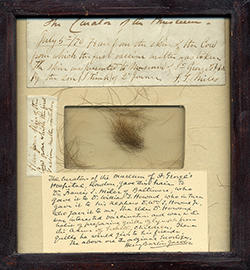 In addition to this wealth of research materials, the Jacobs Collection contains a unique and interesting object:  some clippings of the hair of the cow named “Blossom” from whom Jenner first removed cowpox lymph. The cow hair was initially protected in small envelopes as it was exchanged as a gift among a number of physicians. Dr. Jacobs later had the cow hair housed in a small wooden frame surrounded by its former paper containers and notes attesting to its authenticity and history: ‘The Curator of the Museum of St. George’s Hospital, London, gave this hair [1870] to Dr. Francis T. Miles of Baltimore, who gave it to Dr. William T. Howard, who in turn gave it to his nephew Dr. Wm T. Howard Jr. who gave it to me. The elder Dr Howard was interested [in] vaccination and was in the habit of preparing quills of lymph from the arms of healthy children. These quills he would give to his friends. The above are the original Envelopes. [signed] Henry Barton Jacobs.’

Dr. Jacobs, an avid antiquarian, preserved in his note the fact of the old-fashioned distribution technique used by Dr. William T. Howard.  More importantly, by the very act of framing the cow hair, along with safeguarding and displaying all the evidence of its provenance, Henry Barton Jacobs transformed a souvenir of a visit to St. George’s Hospital by Dr. Miles in 1870 into a veritable medical ‘relic.’ More than any rare book or manuscript that he owned, this remarkable object displays, with documented links, the direct connection of Dr. Jacobs, not only to Edward Jenner, but more significantly, to the original source of the material that Jenner used to demonstrate one of the most successful medical interventions of all time.