Not the Real Aristotle 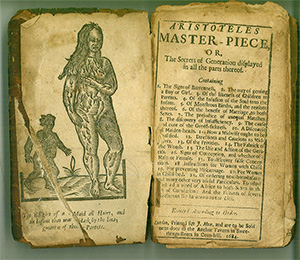 Aristotle’s Masterpiece was the best-selling book about sex and reproduction in both Britain and America for much of the eighteenth and nineteenth centuries. The book is not, however, by Aristotle. The title was a nod both to the fact that Aristotle was the leading classical authority on generation, and to his somewhat unexpected reputation as a sex expert in seventeenth-century England!

The Historical Collection’s first edition (1684) is one of a dozen or so copies held in libraries around the world. It is of particular interest because the setting of type on the title page is unique. While the publisher John How registered his book with the Stationers Company, thus reserving rights to himself, it seems that the book may have been pirated almost immediately.

Such speedy popularity was a harbinger of things to come: by the middle of the eighteenth century, there were more editions of the Masterpiece than all other English popular books about reproduction combined. In part, such popularity was due to its utility for childbearing women — details about pregnancy and the care of infants. However, its sensational discussions of the sexual act and monstrosity appealed to male readers as well. A surprising number of teenage boys, for example, are recorded as having read the book. Many copies of the book look as well-read as the one you see here.