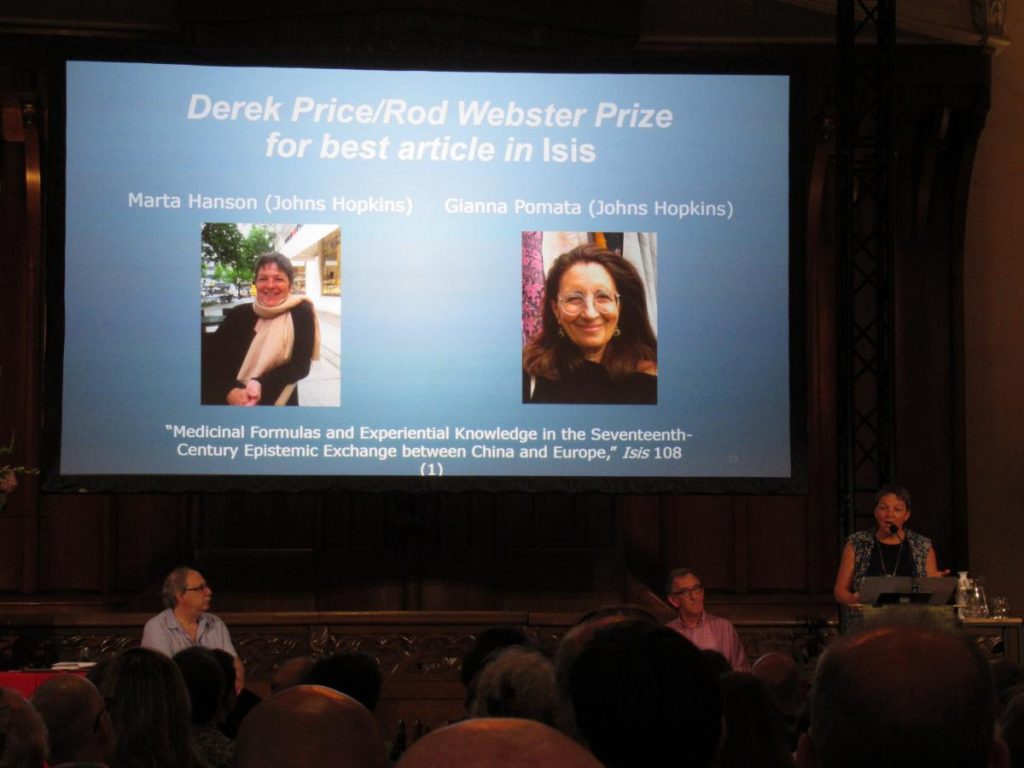 More images from the award ceremy can be found here.

Text of the award letter:

Recipes should be considered an essential and nearly universal epistemic genre, Gianna Pomata and Marta Hanson contend in their erudite, methodologically ingenious, and vigorously argued essay, an exemplar of collaborative research and writing. The authors take as their premise the seldom-explored fact that recipes are among the earliest and most abiding forms of recording, transmitting, and circulating empirically-based knowledge, particularly in medicine and pharmacology, across numerous languages and traditions. Challenging scholarship on knowledge exchange dominated by accounts of chauvinistic appropriation of non-Western practices or the failures at mutual understanding, the authors’ research in original early sources of a stupendous linguistic range (evident in their translations of texts from Chinese, Latin, French, German, Spanish and Portuguese into English), points to medicinal recipes as artifacts of ongoing, relatively unprejudiced dialogues between Chinese and European scholars. By the early modern period, the written texts of most recipes were similar in layout and content. They typically began with a standard formula specifying ingredients in an itemized column, followed by a prescription offering directions for their processing, dosage, use, and modification for particular situations such as geographical differences or for individual cases (for example, according to the age, gender, or social status of the patient). Recognizing these shared characteristics allowed Hanson and Pomata to identify, through a close comparative analysis, the original 16th-century Chinese source and its likely transcriber-translator, the Jesuit Michael Boym, of the first medicinal recipes intentionally published in Latin in 1682 in order to be disseminated among missionaries and other European travelers in the East.

But the essay is not merely aimed at authenticating Boym’s work. In their extraordinarily sensitive consideration of irregularities and changes to these texts over time, the authors offer several new, if avowedly provisional, conclusions. First, they show that Boym’s recipes contained transcriptions, translations, and mistranslations from Chinese to Latin, which reflects recipes’ liminal status between oral and written mediums of communication. Second, they speculate that Boym and some of his successors expressed a concern to convey the practice of Chinese medicine as faithfully as possible by relying on the global visual conventions of recipes. Although the Chinese recipes rendered in Latin had titles and listed plants that were exotic to European readers, preserving their vertical format in printed editions signaled a familiar and authoritative type of information. This rich, provocative piece is considerably more than the sum of its parts. It is poised to be agenda setting for specialists but its insights should attract the interest of a broad range of scholars, both within and beyond the history of medicine and science.