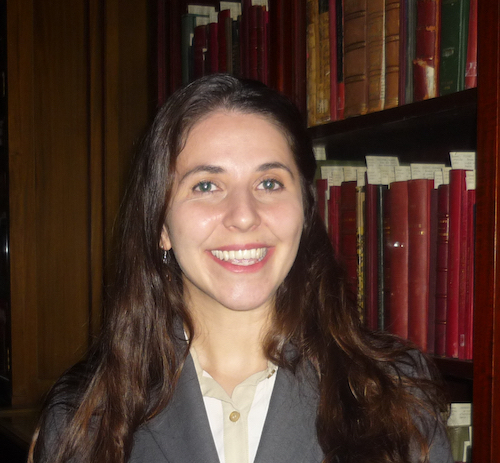 Assistant Professor of the History of Medicine
eobrie19@jhmi.edu

History of medicine in colonial and post-colonial Mexico and Latin America; history of surgery with a focus on obstetric surgery; history of fertility control, sterilization, and obstetric violence; history of ideas about race and indigeneity in medicine; popular protest and healthcare in 1930s Mexico.

My research and teaching interweave the history of medicine with social and cultural history in order to examine themes of gender, race, religion, empire, and nation in the production of medical knowledge.

My first book project, Surgery and Salvation: Religion, Racial Medicine, and Reproductive Politics in Mexico, 1745-1940, is under contract with UNC Press. That book is based on my dissertation project, which received the Forum for History of Human Science Dissertation Prize, the LACS-SHA Richmond Brown Prize, and The Nineteenth Century Section of the Latin American Studies Association. Surgery and Salvation illuminates how religious and theological ideas influenced obstetric surgery over time; how race and class became organizing logics for discourses about surgical advancement; and how childbearing people in Mexico experienced, and sometimes contested, the ways in which patriarchal medical authorities influenced their reproductive choices. This research has been supported by grants from the American Council of Learned Societies/The Andrew Mellon Foundation, the National Science Foundation, the Tinker Foundation, the American Historical Association, and the History of Science Society. During the 2022-2023 I am on research leave in Mexico with support from COMEXUS-Fulbright.

Along with Dr. Altina Hoti, I am also co-director of a two-year grant from the National Endowment for the Humanities program in Scholarly Editions and Translations. We received funding to produce the first English-language translation and critical edition of Embriologia Sacra (1745), authored by Jesuit priest and Inquisitor Francesco Emanuele Cangiamila. The project will be carried out with the support of advisory board members Pamela Voekel and Bethany Moreton of Dartmouth University and Paola Bertucci and Ivano Dal Prete of Yale University.

My BA training in Chicano/Latino Studies inspired a life-long interest in migration, immigration, and citizenship; I welcome inquiries from students interested in any aspect of the history of medicine in Mexico, Latin America, or the Spanish Caribbean, or in historical research on medicine and migrant or Latinx communities.

“The religious history of Caesarean surgery and what it means for the abortion battle: How colonial powers used Caesareans to define the boundaries of unborn life,” Washington Post, March 24 2022.

“The Many Meanings of Aborto: Pregnancy Termination and the Instability of a Medical Category Over Time.” Women’s History Review. (Published online October 2020, in print 2021).

With Hanni Jalil-Paier, “The Crisis in Colombia is Rooted in Structural Inequality, and has been Exacerbated by COVID-19,” Washington Post, June 2021.

With Jimena Perry, “Colombia is in Crisis. Vaccine Nationalism is Making it Worse,” Latino Rebels, May 2021.

Other publications, presentations, and media

“Eugenics in Mexico and the Catholic Response,” The Berkley Center for Religion, Peace, and World Affairs at Georgetown University. December 2019.

“Resistance and Agency in the History of Medicine: Decolonial Perspectives,” Consortium for the History of Science, Technology, and Medicine, Latin America Section, April 22.

“De-centering the History of Reproduction: The View From Mexico and the Global South,” April 22 Bowdoin College, Spring 2021.

“As Small as a Grain of Barley: The Bourbon State and the Caesarean Operation in New Spain, 1771-1810s,” Generation to Reproduction seminar series in the Department of History and Philosophy of Science at Cambridge University, February 2021.

“Empire, Colonization, and Reproductive Violence: Centering Narratives from Mexico and the Global South,” Center for the Study of the Southwest, Texas State University—San Marcos, April 6 Spring 2021.

The History of Science and Medicine Colloquium, Yale University, “From Syringe to Surgery, and Back Again: Baptizing the Unborn in the Catholic World, 1770-1875.” October 2019.

“Healthcare and Hospitals in Mexico: Past and Present” For the Fulbright 2019-2020 Grantees. Mexico City, August 2019.

AS.140.231 Health and Society in Latin America and the Caribbean

AS.140.106 Survey of the History of Modern Medicine

ME.150.722 Introduction to the History of Medicine

OPHOM History of Medicine Survey 3: Science and the Practice of Medicine

OPHOM History of Medicine Survey 4: Biomedicine and its Consequences