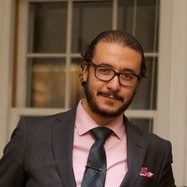 Ahmed Ragab is a historian, physician and a documentary filmmaker. He is the founding director of the independent Center for Black, Brown, and Queer Studies, and co-founder of Pinwheel Productions—a film production studio dedicated to supporting Black, Brown and Queer artists and stories. He received his medical degree from Cairo University School of Medicine in 2005, and PhD from the Ecole Pratiques des Hautes Etudes in Paris in 2010.

Ragab’s research focuses on the history of medicine in the premodern Middle East and the Islamic World as well as colonial and postcolonial medicine, science and technology. He also studies and publishes on gender and sexuality in the medieval and early modern Middle East, postcolonial studies of medicine, science and religion, and other questions in the history of medicine, science and religion. His first book, The Medieval Islamic Hospital: Medicine, Religion and Charity (Cambridge University Press, 2015) was the first monographic study of Islamic hospitals. It analyzed hospitals as central institutions of the medieval Muslim city that conditioned the city’s physical, medical and spiritual landscape. The book places the Islamic hospital within localized narratives of need, health and sickness, and discusses how they impacted medical thought and practice at the time. His second book, Piety and Patienthood in Medieval Islam (Routledge Press, 2018), examined the pious construction of patienthood in the early Islamic medieval period. It investigated the deeper history of the prophetic medicine literature uncovering how pious narratives and writings of medical and religious scholars in the classical Islamic period conditioned the ways Muslim patients understood their bodies and experienced diseases, how they approached medical care, and how they perceived their suffering and recovery. Finally, his third book, Medicine and Religion in the Life of an Ottoman Sheikh (Routledge, 2019) traces the life and career of al-Shaykh Aḥmad al-Damanhūrī, who was the rector of al-Azhar university in the second half of the eighteenth century, as a religious scholar with a remarkable scientific and medical career. The book sheds light on the place of science and medicine in Egyptian Ottoman scholarly culture on the eve of colonization.

Ragab is currently working on two new book projects. The first, Communities of Knowledge: Science in Medieval Europe and Islamdom (Under contract with Princeton University Press) is co-authored with Professor Katharine Park (Harvard University). The book looks at the history of medieval and early modern science across traditional boundaries separating Europe and the Islamic world, using objects to investigate the production of scientific knowledge and practice. The book investigates objects as meaning-bearing categories that provoke epistemic investigations, which in turn maintain or disrupt these objects’ coherence. The second, Around the Clock: Time in Medieval Islamic Clinical Cultures (under contract with Johns Hopkins University Press), investigates the place of time as an epistemic and cultural category in medical thought and practice. It looks at how time is articulated in a variety of contexts, from understanding seasonal variations and astrological and astronomical changes, to aging, to disease progress and to the place of time in defining gender categories.

Ragab’s work investigates colonial and postcolonial science, technology and medicine in the Middle East. His work discusses debates on progress and reform in the nineteenth and twentieth century, the establishment of new medical and scientific faculties in the region, and the formation of new scientific elites. His most recent works have paid attention to the affective economies underwriting the making of colonial and postcolonial science and medicine. He investigates the production of modern western medical systems of thought, practice and education in the colonial and postcolonial Middle East and Islamic world. In this context, he looks at how new and old medical cultures interacted in the daily work of physicians and medical practitioners, and in the physician-patient encounters.

“Translation and the making of a medical archive: The case of the Islamic “Translation Movement”,” Osiris 37. (2021—forthcoming)

“Illness and the city: Preliminary notes on the place of hospitals in Muslim pietistic spaces,” Journal of Islamic and Muslim Studies 3:2. (2019) Pp. 1-20.

“Sira and asbab al-nuzul: Context as commentary” in The Routledge Companion to the Quran, Daniel A. Madigan, Maria Massi Dakake, and George Archer (eds.), London: Routledge, 2021

“The piety of health: The making of health in Islamic religious narratives” in Islam and Biomedicine, Al-Akiti, Afifi, Padela, Aasim (eds.), Geneva: Springer, 2020